Armed with some of the greatest songs ever written, THE MIRACLES feat. Smokey

Robinson set the stage for what became known the world over as “MOTOWN aka the MOTOR CITY” sound of Detroit, MI. Songs like “Shop Around”, “I Second That Emotion”, “Tears of A Clown”, “Love Machine”, “You’ve Really Got A Hold On Me”, “Tracks of My Tears” “Ooh Baby Baby” and many more that spans a 40 year career that continues today.

Following in their footsteps: The SUPREMES featuring Diana Ross with hits like

“Where Did Our Love Go”, “Baby Love”, “You Keep Me Hanging On”, “I Hear A Symphony”, You Can’t Hurry Love”, Someday We’ll Be Together and of course “Stop! In The Name Of Love” to name a few.

Along with the late great MARVIN GAYE whose truly amazing body of original hits includes “Ain’t That Peculiar”, “Can I Get A Witness”, “I Heard It Through the Grapevine”, “Let’s Get It On”, “Sexual Healing”, “Got To Give It Up”, “Mercy Mercy Me” and the incomparable “What’s Going On”, form the backbone of hit songs known the world over as MOTOWN.

See the THE MIRACLES, feat. Sydney Justin, The Sounds of THE SUPREMES with 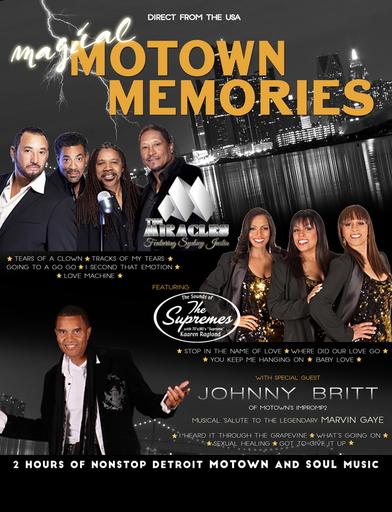